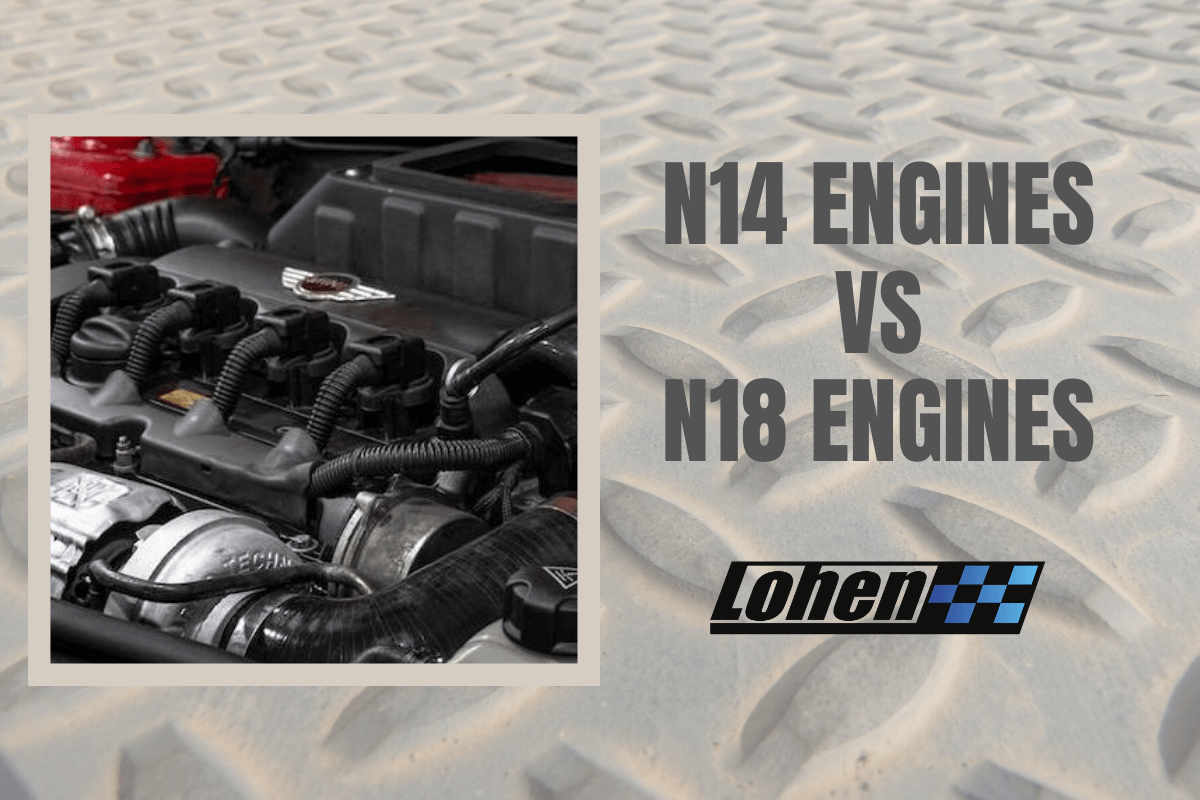 We’re often asked by newcomers to the MINI scene, and more experienced MINI owners, about the pros and cons of the N14 and N18 engines and the common pitfalls that owners should be aware of to avoid any disasters. Both are iterations of the Prince engine, a joint development between PSA Peugeot Citroen and BMW. There are also other models of engine for MINI, such as the N12 and N16, but the most common ones that come through our doors are the N14 and N18 models.These are most commonly found on the Cooper S and JCW models, released between 2006 and 2017, depending on the body shape. Here, we’ll attempt to dispel some of the myths and rumours surrounding the N14 and N18 MINI engines and hopefully provide you with a much clearer overview on which engine is most likely to be suited to your needs.

Knowing which engine your MINI has is important, not just because some parts are not compatible across both versions but so you can understand the common issues that are found and what your servicing schedule should look like across the N14 and N18 models.

The original N14 engines were beset with problems from the off, with some owners finding issues not long after driving off the forecourt. The most common faults seen in N14 engines include timing chain problems, fuel pumps failing, issues with valve coking and excessive oil consumption. Luckily, when the N18 was released in mid 2010-2011, a lot of the original issues were rectified and overall performance improved. A double-VANOS system improved power and fuel efficiency and the timing chain was improved to help reduce the likelihood of a common N14 fault occurring. Whilst coking can occur on the N18, it is much less commonly seen than in N14 engines.

Unfortunately, the reputation of N14 engines being less than reliable doesn’t go without merit. The main issues we tend to see with N14 engines are as a result of irregular oil servicing, timing chains, coking and fuel pump failures. Here’s how to spot some of these common problems so you can get them fixed as soon as possible to avoid further damage.

If you can hear a rattle, almost like the sound of a noisy diesel engine, then it may be timing chain issues, pulley and belt problems can cause similar noises so we recommend this is checked by an expert. The best time to check this is with a cold engine. So leave the car overnight, start the engine from cold and listen for any noise. By slowly building the revs to around 2-3k and holding, the rattling noise should sound progressively worse. Once you have driven your MINI and the engine has had a chance to warm up you may not be able to hear it due to oil pressure increasing. However, If you hear it when the engine is warm then this indicates a significant problem with your timing chain and it should be urgently changed.

A build-up of carbon deposits on the inlet in your engine can cause issues with the throttle. You’ll most likely notice this when there’s a hesitation between putting your foot down and your car accelerating. While catch cans slow the problem of coking, the only way to really cure the issue is by decoking your engine. Our Lohen de-choke service for N14 MINI Cooper S and JCW models will minimise the impact of choking in your vehicle. We recommend this service on N14 engines roughly every 30-40,000 miles, especially if your MINI is used in frequent stop-start driving.

If you’ve found that your MINI is struggling to start from cold, it may be a sign that your fuel pump is beginning to fail. Rather than starting immediately, your engine may turnover 3, 4 or even 5 times rather than starting immediately, which is the most common way to tell if it is on its way out.  To determine if your fuel pump has failed, at Lohen we can monitor target and achieved fuel pressures and arrange for a replacement fuel pump to be fitted if required. There are also several areas where cracking can occur causing further damage, such as the rocker cover, thermostat housing and the cylinder wall. Oil leaks are also common from multiple areas such as the turbo oil feed pipe, rocker cover gasket and oil filter housing gasket. Not maintaining and regularly checking your oil level is the key cause for internal engine problems on the N14 engine and a poorly designed dipstick makes checking oil levels more tricky than it needs to be. From our experience, it seems that some N14 engines can be more reliable than others, but there is always a reason for an engine to fail.  The main reasons we see for an OEM N14 engine failure will be low oil levels, eventually causing oil starvation, and timing chain failure when it completely snaps. The N14 engines require a great deal of TLC including regular spark plug and oil changes, as well as oil flushes and, above all, making sure that the oil level is always topped up and checked regularly.

Luckily, a lot of the issues seen with the N14 engines were ironed out with the next version. Although early N18 models were reported to struggle with fuel pump, timing chain and the occasional Vanos problems these were rare and since 2011 the engines have become much more stable. To make sure your N18 engine is performing to the best of its capacity, ensure that regular services are carried out and your oil and spark plugs are changed regularly. We recommend these are changed more frequently than what the CBS (condition based service) indicator advises.

As we’ve covered, N14 engines can be prone to coking as carbon builds up around the valves and intake ports. To rectify this properly, you’ll need to see a MINI specialist and have them carry out a decoking service. Adding catch cans may help to slow down coking, but it will not stop the issue from occurring altogether and neither will blocking off one of the breather pipes, the latter will increase crankcase pressure and produce running problems so is not recommended. It’s important not to remove your original heat shields, when fitting an AEM induction kit and heat shield, as doing so will most likely result in your rocker cover being melted. If you’re finding that your MINI is suffering from the dreaded death rattle, simply replacing the timing chain tensioner will not fix the rattle. You’ll also need to address the guide rails and other major components that may have been affected by the loose tension.

Which is more suited to tuning?

The team at Lohen, like many of you, want to get the most performance out of our MINIs and there is a big difference in what results you can expect to see from tuning of an N14 and N18 engine. If you’re looking to get up to 270bhp from your engine then Stage 1 and Stage 2 modifications and remaps will set you back around the same in terms of cost for both N14 and N18 engines. If you’re looking for big power, an N14 engine is capable of producing up to and around 300-400bhp. Whilst N18 engines tend to be more reliable, less research and investment has been put into this engine so significant investment, research and testing would be required to hit similar figures. Whilst the N14 might have the upper hand here, it’s important to note that both engines have the same limitations when it comes to transmission. Automatic cars running on N14 and N18 engines will not produce as much power as their manual counterparts.

Ultimately, when it comes to deciding which is better between an N14 and an N18 engine it is a case of personal preference and opting for the engine that will meet your performance needs. For all their reputation, N14 engines do not tend to be as bad as some people say, provided they are treated well and maintained correctly. Issues tend to arise when mismanaged or as a result of oil starvation, so keeping on top of regular servicing and caring for your engine will help you avoid problems with your N14 engine.