SKU
powerflexblackseriesbushkits
Be the first to review this product
£109.00 £90.83
Checkout now
Are you an Amazon customer? Pay now with address and payment details stored in your Amazon account.
Add to Wish List Add to Compare
Skip to the end of the images gallery 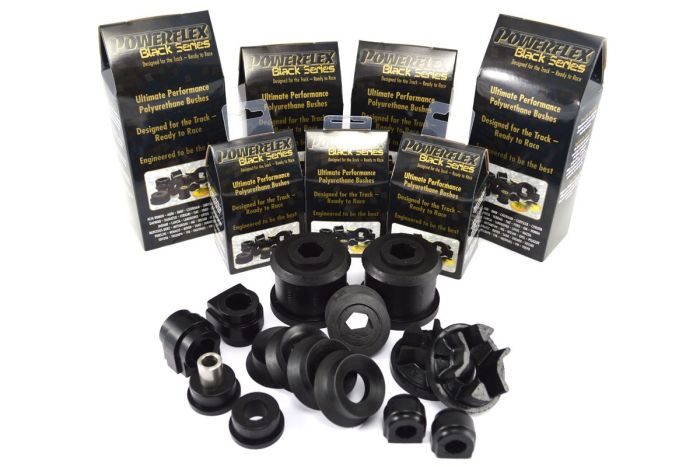 Skip to the beginning of the images gallery
Details

Can't decide which bushes to go for? Not sure how many you need to order? Using our experience we've created the Powerflex Bush Packs as recommended by ourselves. These packs make ordering simple, we put exactly the bushes you need to suit one car, this way you don't order too many or not enough. The three packs we've designed are split into sections, engine & gearbox, suspension, and the complete pack. The packs consist of not all the bushes available through Powerflex but the ones that we feel the MINIs benefit the most from having. Each pack is enough to complete one MINI.

You may notice the suspension & complete pack don't include all the suspension bushes from Powerflex. We've excluded the front and rear anti-roll bars bushes because replacement bushes come with uprated anti-roll bars from manufacturers such as Eibach. If your serious about handling, changing the full anti-roll bar setup would be far more beneficial than keeping the standard items with Powerflex bushes. Also, by the time you've got to the anti-roll bar bush to change it during the fitting process it wouldn't take any longer to change the anti-roll bar at that point. For similar reasons, we only include 4 rear control arm bushes for the upper rear control arms. This way if you decide to uprate the lower rear control arms you won't need the other 4 bushes (Powerflex bushes only fit standard rear control arms). We exclude the metal supports for the front wishbone rear bushes as they are primarily for motorsport use.

The complete pack includes everything from both engine & gearbox, and suspension packs plus a steering rack mount bush.

Lohen offers in-house fitting for all products at our workshop in Eccleshall, Staffordshire. Here are the important things you need to know:

Required Additional Items/Services - No additional items or services are needed.

Returns and Refund Policy - Refunds are available within 7 days after delivery for products that are unused and are in original packaging. Special order goods are non-refundable. Products that are damaged in transit to or from the customer can be refunded up to 14 days after the product has been delivered. Products returned to us in imperfect, non-resalable condition will not qualify for refund. Products that are faulty due to manufacturing process are refundable under the manufacturers' warranty for a limited time specified in the manufacturer's terms and conditions. These do not apply if the product has been fitted incorrectly or mis-used, motorsport use could further reduce the manufacturer's warranty. If an order is cancelled or refunded the buyer is responsible for the return of the goods to such address as directed by the supplier and is at the consumer's sole expense. This does not affect your statutory rights